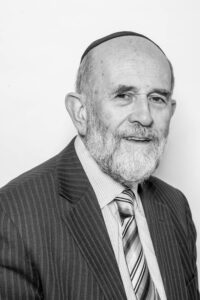 We will remember Victor as a gentleman, a selfless man and a wonderful colleague who devoted much of his free time as a trustee of several charities and as a senior member of the Jewish community. He was also the school governor of Menorah Primary School and was responsible for its premises. Like his wife Naomi, he was passionate about education and advocated strongly for the education of those with special needs.

He displayed charm and wisdom borne from experience and care, which he was always willing to share.

Victor worked with the Schimmel and Oestreicher families from 1973, providing loyal service to them for half a century. He was the Project Manager at the Moledene Group of Companies, during which time he a time he proved to be an unrivalled problem-solver. In particular, he performed an outstanding role in overseeing the acquisition of 20 derelict inner-city factories in the 1980s such as Glaxo in Greenheath and Airfix in Wandsworth, as well as their subsequent large-scale conversions to workshop units for rent.

Following on from these successes, he proceeded to advise on the acquisition of substitution properties – many of which are still in Lee Baron’s managed portfolio today – and where and how to add additional value. He was responsible for the complete transformation of the buildings at Corbet Place/Commercial St Spitalfields into the ‘Jack’s Place’ live-work development in Spitalfields, helping to attract a new class of tenants such as All Saints. Most recently, he was thriving on another project, preparing the work for an additional floor on nearby Lana House, as well as managing the remainder of the portfolio that was transferred to Lee Baron six years ago.

He will deeply be missed by all of us at Lee Baron both as a colleague and a friend.

We keep his family in our thoughts as they endure this difficult time.